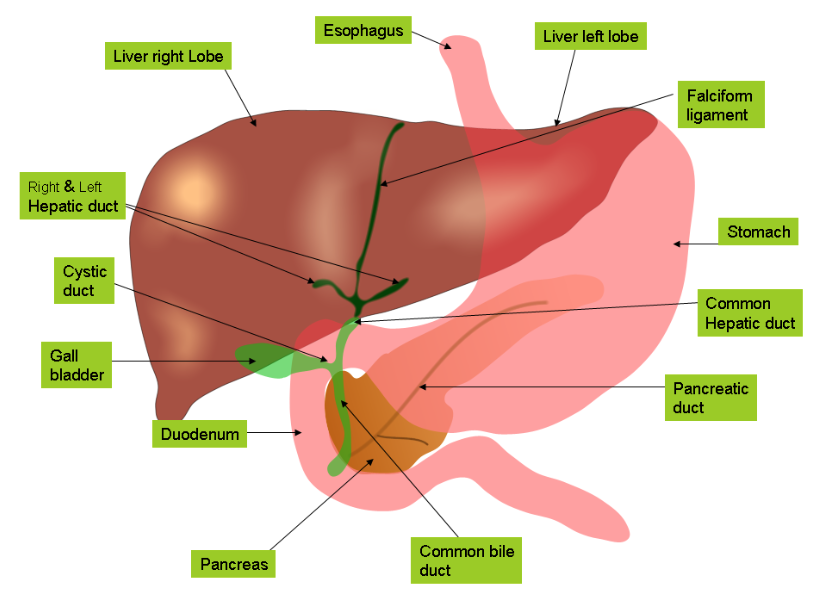 The digestive system is made up of the gastrointestinal tract, also called the digestive tract and the associated glands, which include the salivary glands, the liver (with gallbladder) and the pancreas.

Anatomy of Liver and Gallbladder

Liver is the largest gland and the largest internal organ of the body weighing about 3.2–3.7 pounds in an adult human. It is situated in right-upper quadrant of the abdominal cavity, tucked against the inferior surface of the diaphragm. The liver consists of two major lobes, left and right, and two minor lobes, caudate and quadrate.

The gallbladder is a thin muscular small sac on the inferior surface of the liver. It is about 8 cm long and 4 cm wide.

The principal function of liver is maintenance of body’s internal milieu. The liver performs a wide variety of functions as described below.

1. Production of Bile: Bile is a bitter, alkaline, viscid, greenish yellow fluid secreted by liver and stored in the gall bladder. Daily about 600-1000 ml bile is secreted. Bile plays a role in digestion as it neutralizes and dilutes stomach acid and emulsifies fats. Bile also contains cholesterol, fats, fat-soluble hormones, lecithin and excretory products like bile pigments. Bilirubin is a bile pigment that results from the breakdown of hemoglobin. Bile secretion into the duodenum continues until the duodenum (small intestine) empties.

a. Following a meal most of the glucose that is absorbed is stored by the liver in the form of glycogen. Hepatocytes help control blood sugar levels. During fasting liver releases glucose, derived either from breakdown of glycogen or from gluconeogenesis using amino acids. Post meal hyperglycemia is prevented by liver as blood from the intestine passes through the hepatic portal vein to liver, where glucose and other substances are removed from blood by hepatocytes, stored, and secreted back into the circulation when needed.

b. Minerals such as iron (ferritin and hemosiderin) and copper are stored by liver.

c. Vitamins like A, B12, D are stored in large amounts where as others like folate and vitamin K are stored in smaller concentrations, thus disappearing rapidly in cases of dietary deficiency.

3. Metabolism of Nutrients: The nutrients ingested by us are not always in the proportion needed by the tissues, thus some nutrients are converted by liver into others. E.g. if there is excessive consumption of proteins. the liver has an oversupply of amino acids and an undersupply of lipids and carbohydrates. The hepatocytes then break down the amino acids (by different metabolic pathways) so that they can be used to produce adenosine triphosphate, lipids, and glucose. Hepatocytes also transform substances that cannot be used by most cells into more readily usable substances. Vitamin D is hydroxylated in the liver. The hydroxylated form of vitamin D is the major circulating form of vitamin D, which is transported through the circulation to the kidney, where it is again hydroxylated. This active form of Vitamin D functions in calcium maintenance.

4. Detoxification: The liver forms a major line of defence against many of the harmful ingested substances and toxic by-products of metabolism. Many substances are detoxified by altering their structure. These substances thus become less toxic or can be easily eliminated. E.g. Ammonia, which is a toxic by-product of amino acid metabolism is converted to urea by hepatocytes. Urea is less toxic and is then eliminated by the kidneys in the urine. Other harmful substances are removed from the circulation and excreted by hepatocytes into bile.

5. Phagocytosis: 80% of phagocytic activity of liver is because of Kupffer cells. They remove the worn-out and dying red and white blood cells, bacteria, viruses, and other debris that enter the liver through the circulation. Kupffer cells can also produce various inflammatory mediators.

6. Synthesis: The liver is involved in the production of: albumins, fibrinogen, globulins, heparin, transferrin, protease inhibitors, clotting factors, complement factors which are released into circulation.