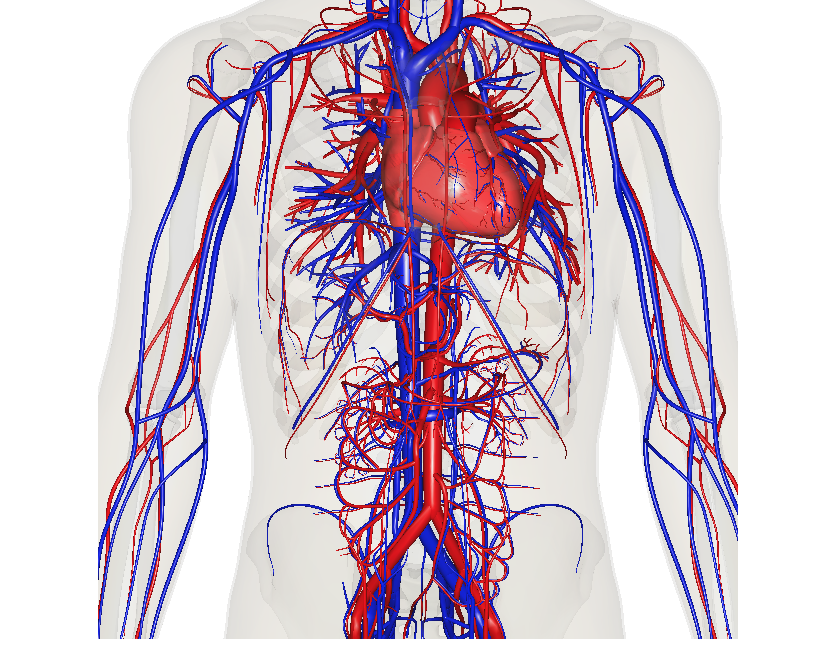 Parts of the human circulatory system

Our circulatory system is composed of the heart, blood vessels and blood.

Blood vessels
In humans, the blood vessels span over 60,000 miles. There are mainly three types of blood vessels – arteries, veins and capillaries. Arteries mainly carry oxygenated blood (pure) to all parts of the body. They do not have valves. Veins are the blood vessels, which contain valves and carry deoxygenated blood (impure) towards the heart. Arteries and veins further divide to become smaller vessels known as arterioles and venules. Capillaries are very fine blood vessels connecting the arterioles and venules. As the capillaries possess a very thin wall, it is allows effortless passage of blood cells as well as exchange of materials and gas between the blood and body tissues.

The heart is located safely between two lungs and the diaphragm within the mediastinum. It is a hollow, muscular organ having four chambers i.e. two atria and two ventricles. Atria are the two upper compartments while ventricles are the lower compartments. There are walls separating these chambers known as the septa. The heart has a protective covering, the pericardium.

Function: Heart performs the function of pumping blood throughout the body through the vascular system. It thus carries the necessary nutrients to the body tissues and removes waste products (mainly carbon dioxide) from the cells.

Sound of the Heartbeat – Heartbeats make the sound of  “LubDub”, which is caused by the closing of the heart’s valves.

Control of the cardiac activity/ heartbeat – The Sinoatrial Node (SA node) i.e. the pacemaker of the heart regulates the heartbeat. The brain sends an electrical impulse which is received by the SA node, which is located in the right atrium. The SA node sends a signal to the atrioventricular node (AV node) in the right ventricle, thus making the heart contract. Also, a neural center in the medulla oblangata moderates the cardiac activity through autonomic nervous system (ANS). Sympathetic neural signals can increase the heart rate by causing the heart to contract, thereby increasing the cardiac output. Alternately, the parasympathetic neural signals decrease the rate of heart beat and thereby the cardiac output.  The vagus nerve is a cranial nerve that leads to decreased cardiac activity.

Blood
Blood is a special connective tissue composed of plasma and the formed elements. It supplies nutrients and oxygen to the cells, and carries waste products away from the cells. It also helps regulate body temperature.

Plasma is a straw colored fluid that constitutes about 55% of blood volume. 92% water, 7% proteins and 1% dissolved solutes. Plasma contains proteins namely albumin, globulin, fibrinogen and antibodies. It also has minerals, glucose, fats, etc. in small amounts. Albumin helps maintain the osmotic balance by preventing the loss of water from blood. Fibrinogens are essential for blood clotting. Globulins are a part of the defence mechanisms of the body. Plasma without the clotting factors is called serum.

Circulatory system performs the basic functions of transport of nutrients and waste products, homeostasis as well as protective function. These are described in detail below.

Blood Groups
Though blood from different human beings appears to be similar, it is different at the molecular level. Thus if a person requires blood transfusion he has to be given a specific ABO and Rh blood group after careful matching. Otherwise RBC destruction takes place leading to the clumping of the RBCs which can be fatal.  ABO and Rh are the two important and universally used blood groups. RBCs have certain surface antigen, which can induce immune response. ABO grouping is based on the presence or absence of two such surface antigens namely A and B.

Another antigen known as ‘Rh’ is also present on the surface of RBCs. It is named so because it is similar to one present in Rhesus monkeys. If the antigen is present on the RBC the person’s blood group is Rh positive (Rh+ve) and if absent blood group is Rh negative (Rh-ve). If an Rh-ve person is transfused with Rh+ve blood specific antibodies against the Rh antigens are formed. Erythroblatosis fetalis is a special condition of Rh incompatibility seen when a mother mother having Rh-ve blood is pregnant with Rh+ve foetus. During first pregnancy mother is not exposed to the Rh antigens of the fetus. However, at the time of delivery of the first child, there is a possibility of exposure of the maternal blood to small amounts of the Rh+ve blood from the fetus. That’s when the mother starts preparing antibodies against Rh antigen in her blood. In case of second pregnancy, the Rh antibodies from the mother (Rh-ve) can leak into the blood of the fetus (Rh+ve) and destroy the fetal RBCs. This could be fatal to the fetus or, could cause severe anemia and jaundice to the baby. This condition is called as the erythroblastosis foetalis. This can be avoided by administering anti-Rh antibodies to the mother immediately after the delivery of the first child.

Heart and the associated parts of the circulatory system perform vital functions of our body and by having a healthy diet and stress free lifestyle we can help them in performing their functions efficiently.