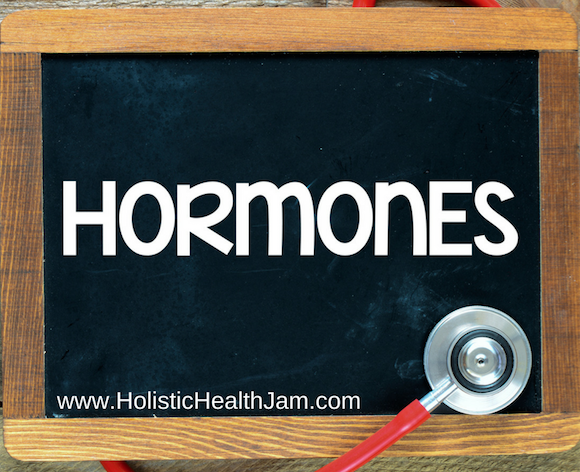 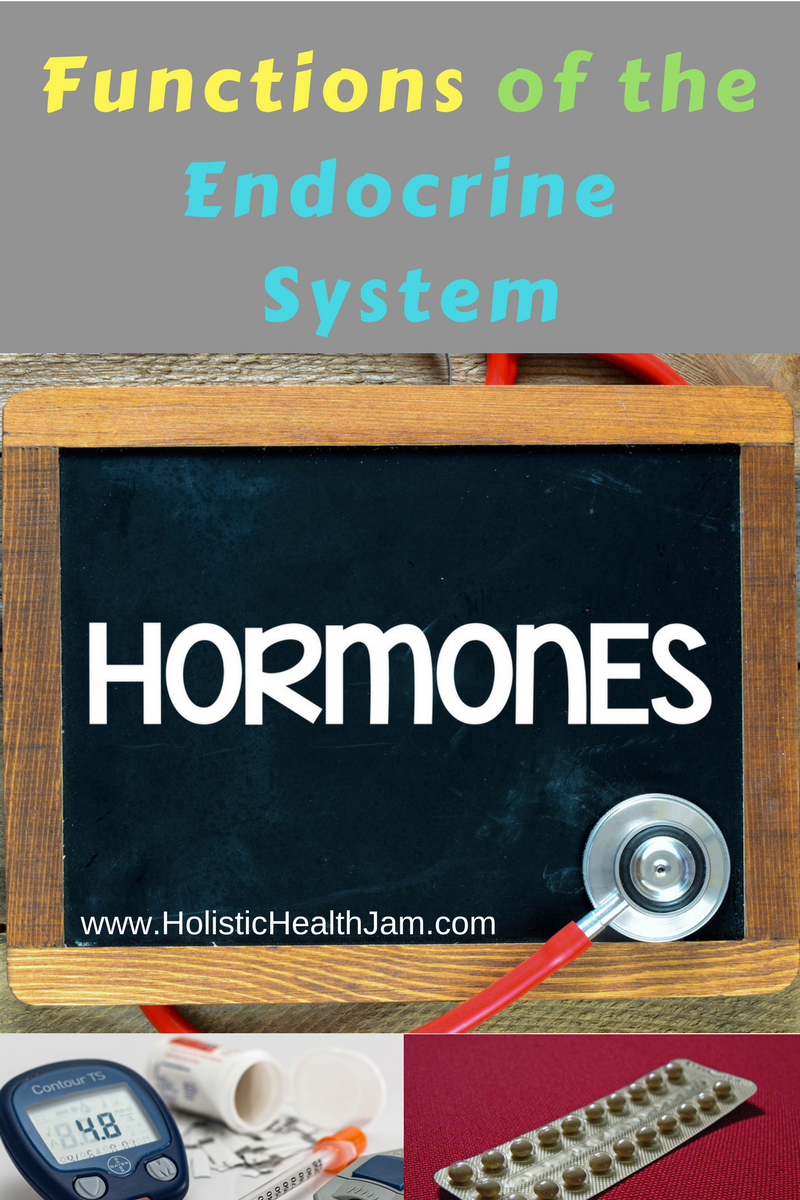 Endocrine glands are the ductless glands or glands that lack ducts. Their secretions are known as hormones. The endocrine system is made up of endocrine glands as well as other hormone producing diffused tissues/cells present in different parts of our body. The main endocrine glands of our body are pituitary, pineal, thyroid, adrenal, pancreas, parathyroid, thymus and gonads (testis in males and ovary in females). Additionally, some other organs, such as the gastrointestinal tract, liver, kidney, heart also produce hormones. Described below is a brief account of the structure and functions of all major endocrine glands and hypothalamus of the human body.

General characteristics of hormones: Hormones are extremely potent or powerful and are thus required in very small amounts to bring about the desired effects. Though a very small amount is necessary to produce an action, the action produced is long lasting. Hormones help in the regulation of metabolic processes thereby maintaining homeostasis. Regulation of hormone secretion takes place by negative feedback mechanisms. 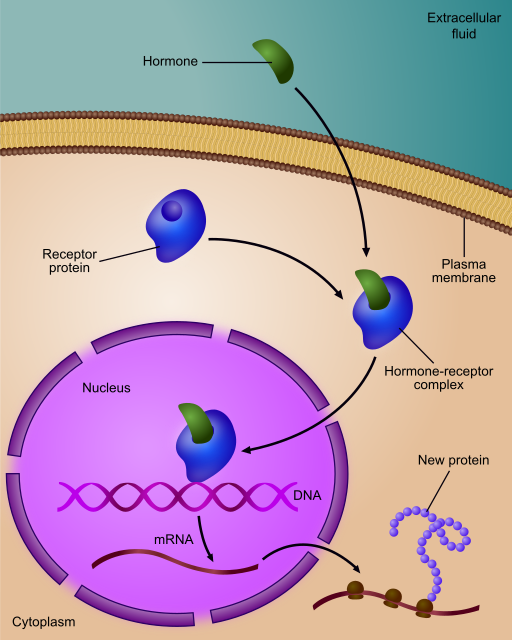 The hormone-receptor complex is formed by binding a hormone to its specific receptor making this complex unique. Biochemical changes occur in the target tissue after this binding. These changes regulate the target tissue metabolism and thereby physiological functions. Hormones that interact with membrane-bound receptors usually do not enter the target cell. These hormones in turn, lead to the generation of secondary messengers such as cyclic AMP, IP3 etc. These secondary messengers further regulate cellular metabolism. Hormones interacting with intracellular receptors such as steroid hormones, iodothyronines etc. mainly cause regulation of gene expression or chromosome function. This is achieved by the interaction of hormone-receptor complex with the genome. Thus physiological and developmental effects in our body are brought by the cumulative biochemical actions of hormones. 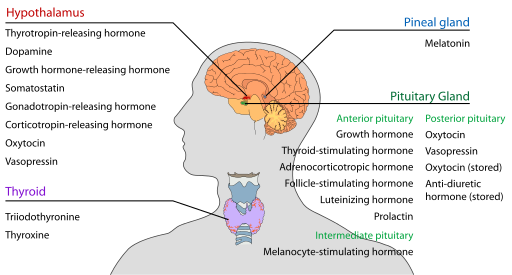 First of all, the HYPOTHALAMUS secretes the releasing hormones, which further target the anterior pituitary gland. Under the influence of these hormones the Anterior Pituitary Gland further secretes 6 different hormones:

1) Human Growth Hormone (HGH) -controls human body growth of the body and by targeting the bones
2) Thyroid stimulating Hormone (TSH) -in charge of the hormone secretion done by the thyroid gland
3) Adrenocorticotropic Hormone (ACTH) – controls the hormone secretion by the adrenal cortex of the adrenal glands
4) Prolactin (PRL) – responsible for the stimulation of milk production by the mammary glands
5) Follicle Stimulating Hormone (FSH) -dependent upon gender; in females, FSH stimulates maturation of an ovarian follicle and ovum while in males it stimulates the maturation of sperms in the testes
6) Luteinizing Hormone (LH) – causes ovulation in females and secretion of testosterone in males.

The Posterior Pituitary Gland as the name suggest is located posteriorly or behind the anterior pituitary gland. It is continuous with nerve fibers of the hypothalamus (supraoptic O hypophyseal tract). It does not actually produce hormones (they are produced by the hypothalamus) but stores them until it is stimulated to release them. The 2 hormones secreted are:

The Thyroid Gland is located below the larynx and around the trachea and is involved in iodine uptake. It produces 3 hormones when stimulated:

T4 and T3 increase basal metabolic rate (BMR) by stimulation of cellular oxygen that is used to produce ATP and regulate metabolism. An increase in blood calcium levels triggers the release of calcitonin. It targets bone cells and inhibits osteoclast activity. Within the kidney tubules, it causes secretion of calcium into urine and thus decreases blood calcium and phosphate levels thereby bringing them back to normal.

The Parathyroid Glands are small glands present within the thyroid gland. There are four.  Parathyroid Hormone (PTH) is secreted by the parathyroid glands. Decreased blood calcium levels stimulate the release of this hormone which further acts on bone cells as well as the kidney cells. PTH thus efficiently increases the blood calcium and phosphate levels and brings them back to normal. PTH and calcitonin jointly are responsible for maintenance of calcium homeostasis.

The Adrenal Glands are present upon the kidneys. They are divided into an outer cortex and an inner medulla. The adrenal medulla produces epinephrine and norepinephrine. These hormones act on the heart, smooth muscles and lungs. They increase the heart rate and blood pressure, cause contraction of the smooth muscle of the blood vessels and increase the rate, rhythm, and depth of breathing. The adrenal cortex produces aldosterone and cortisol on stimulation by ACTH. Aldosterone causes regulation of water and electrolyte levels in the blood and thereby regulation of blood pressure. Cortisol leads to regulation of glucose metabolism. 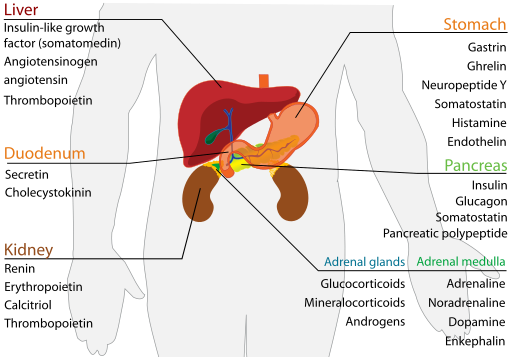 The Pancreas is located behind the stomach and on the left side. This gland performs the functions of both the exocrine gland (digestion) as well as the endocrine gland. Endocrine glands are known as the Islets of Langerhans which produce 2 hormones, Insulin and Glucagon. The Beta cells of Langerhans produce Insulin while Alpha cells produce Glucagon. Insulin decreases blood glucose levels by moving glucose from the bloodstream into cells and promoting glycogen formation within the liver or muscles. Glucagon increases blood glucose levels by causing breakdown of glycogen and release of glucose into the bloodstream.

The Thymus Gland is located behind the sternum. It secretes a hormone known as thymosin that affects the maturation of lymphocytes (T-cells). It thus plays an imperative role in lymphatic as well as immune system. Its size reduces with age.

The Pineal Gland is attached to the thalamus of the brain stem. It produces a hormone known as melatonin. Production of melatonin is stimulated by daylight and it influences emotions.

The Ovaries: After puberty maturation of an ovarian follicle begins under the influence of FSH. Estrogen is secreted by the developing follicle. Estrogen further affects the development and maintenance of female secondary sexual characteristics. It has actions on the hair follicles, the breasts, and adipose tissue. Rupture of the follicle and release the ovum is brought about by LH; the follicle further becomes corpus luteum which secretes progesterone and prepares the uterus for zygote implantation.

The Testes: Production of sperm is caused by FSH while production of testosterone is caused by LH. Thus the development and maintenance of male secondary sexual characteristics is brought about by LH which targets the hair follicles, muscle, bone, and larynx.

3. Thyroid Hormones: Hyposecretion of T3 or T4 during fetal life and infancy causes Cretinism that is characterized by dwarfism and mental retardation. Newborn testing is a must for its prevention. It can be treated by oral thyroid therapy. Hyposecretion of these hormones during adulthood causes Myxedema wherein there is edema, slow heart rate, low body temperature, dry hair and skin, muscular weakness, lethargy, weight gain. Oral thyroid hormones help reduce symptoms. An autoimmune disorder that causes the growth of thyroid and hypersecretion of thyroid hormones, with no negative feedback is known as Grave’s Disease. Here there is enlarged thyroid gland, peculiar edema of the eyes, increased basal metabolic rate (BMR), heat intolerance, increased sweating, weight loss, insomnia, tremor, and nervousness. It can be treated by surgical removal of the thyroid gland, use of radioisotopes to destroy some of the thyroid gland and anti-thyroid drugs to block synthesis of the hormones.

5. Pancreatic Hormones/ Islet Hormones: Diabetes Mellitus (DM) is characterized by hyperglycemia (increased blood glucose levels) and its symptoms include polyuria (increased urination), polydipsia (increased thirst) and polyphagia(increased hunger) i.e. the 3 Poly’s. It is of 2 types, Type I or Insulin Dependent DM (10%) and Type II or NIDDM (Non-Insulin Dependent DM). In Type I DM, there is absolute insulin deficiency. Usually, the age of patients is less than 20 years and the only treatment is insulin administration. As the cells cannot use glucose, fat is broken down, releasing ketone bodies causing ketoacidosis, lowering of blood pH and sometimes causing death. Complications include blindness due to cataracts, retinal vascular disease, and renal failure. Newer treatments include artificial pancreas that detects fall in glucose levels and automatically releases insulin or pancreas transplant which is under study. Type II/NIDDM (90%) is more common and is seen in patients above 40 years of age who are usually overweight, hypertensive and smokers. The problem is usually with the receptors on target cells. It can be controlled by diet, exercise and weight loss. Various anti-diabetic drugs are also used to control the blood glucose levels by stimulation of insulin secretion.

6. Melatonin is a hormone responsible for Seasonal Affective Disorder and Jet Lag.

As mentioned earlier, hormones are also secreted by some tissues which are not endocrine glands. For example, the atrial wall of our heart secretes a very important peptide hormone called atrial natriuretic factor (ANF) which decreases the blood pressure. When blood pressure is increased, ANF is secreted which causes dilation of the blood vessels. This reduces the blood pressure.

The juxtaglomerular cells of kidney produce a peptide hormone called erythropoietin which stimulates erythropoiesis or Red Blood Cell production. Endocrine cells present in different parts of the GIT secretes four major peptide hormones, namely gastrin, secretin, cholecystokinin (CCK) and gastric inhibitory peptide (GIP). Gastrin acts on the gastric glands and stimulates the secretion of hydrochloric acid and pepsinogen. Secretin acts on the exocrine pancreas and stimulates secretion of water and bicarbonate ions. CCK acts on both pancreas and gall bladder and stimulates the secretion of pancreatic enzymes and bile juice, respectively. GIP inhibits gastric secretion and motility. Several other non-endocrine tissues secrete hormones called growth factors. These factors are essential for the normal growth of tissues and their repairing/regeneration.

These special chemicals which act as hormones are essential for chemical coordination, integration, and regulation in the human body. These hormones regulate metabolism, growth and the development of organs as well as the endocrine glands and thus are of vital importance.