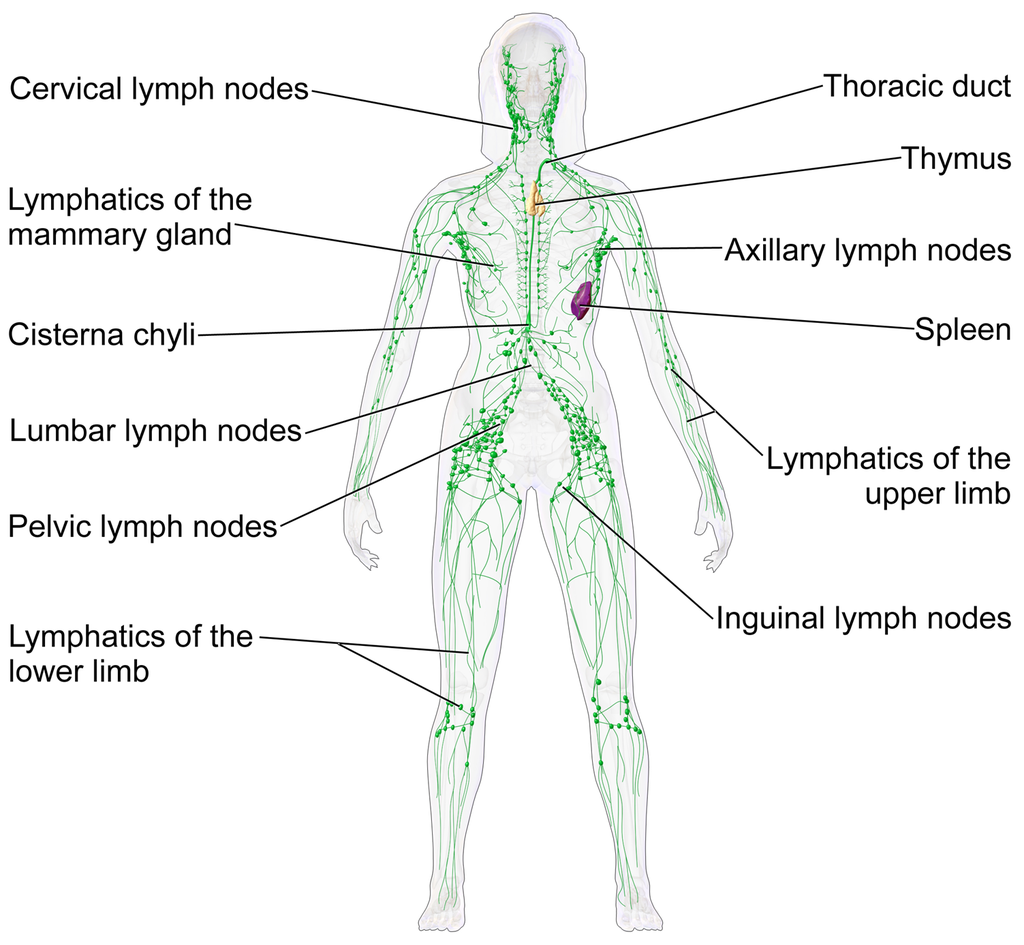 The lymphatic system is a network of tissues, organs, and vessels that help the body maintain its fluid balance.   Arterial blood carries oxygen, nutrients and hormones to deliver to cells.  Once these nutrients leave the arterial super highway, they flow through a liquidy substance between cells called interstitial fluid, to then bring nourishment to the cells.  Ninety percent of the excess fluid returns to the circulatory system.  The remaining 10% of the fluid, which is left out of the circulatory system, is called lymph, which carries with it waste products that were removed from the cells, as well as undigested proteins.

The pharyngeal mucous membrane has masses of lymphoid tissue which are covered by epithelium, with deep pits/crypts that often contain food debris, bacteria, dead white blood cells (WBCs), etc. Pharyngeal tonsils (on the wall of pharynx behind nasal cavity), palatine tonsils (at the posterior margin of the oral cavity) and lingual tonsils (tongue) are the three main pairs of tonsils.

The spleen is the largest of the lymphatic organs located below diaphragm on the left side. It performs several functions as below:

This unpaired organ in the mediastinum and neck region plays a vital role in initial set up of body’s immune system. It is the source of lymphocytes before birth, which circulates to the spleen, nodes and vessels. After birth, it secretes a hormone that causes lymphocytes to develop into plasma cells. Once this job is done it degenerates and is replaced by fat.

5. Peyer’s patches: These are oval elevated patches of closely packed lymph follicles on the mucosa of the small intestines

Functions of the Lymphatic System

1. Maintains fluid balance:  The lymphatic system maintains the volume and pressure of extracellular fluid by returning excess water and dissolved substances from the interstitial fluid to the circulation system.

2. Returns large molecules to blood: 25-50% of blood proteins leak out of capillaries each day.  Because they cannot get back into the capillaries, lymphatic capillaries pick them up and return them to the blood.  If lymphatics are blocked, blood protein decreases leading to fluid imbalances in the body.

5. Body Defence/Immunity: Lymphocytes and macrophages are produced and stored by the lymphatic tissues and organs. They play a major role in building our immunity. A major role of the lymphatic system is to screen the body fluids and remove the pathogens and damaged cells.

1. Lymphoedema: Excessive accumulation of interstitial fluid resulting from injury, inflammation, surgery, or parasitic infections is known as lymphoedema. It is caused by disruption of the lymphatic flow.

2. Metastatic Cancers: When cancer cells break free from the original tumor and travel to other sites in the body, it is known as metastasis. Lymph nodes are common sites of metastatic cancer. As the lymphatic capillaries are easily permeable, the cancer cells swiftly enter and travel in the lymph. They tend to get lodged in the 1st node they encounter and destroy the node by enlarging beyond limits. This is a lymphoma.

4. Non-Hodgkin’s Lymphoma (NHL): NHL is a lymphoma which is similar to the one described above but with a more widespread distribution in the body and a higher mortality rate. It is more common.

5. Ruptured Spleen: It is one of most common consequences of blows to left thoracic or abdominal wall. The spleen bleeds profusely if damaged and may cause fatal hemorrhage.