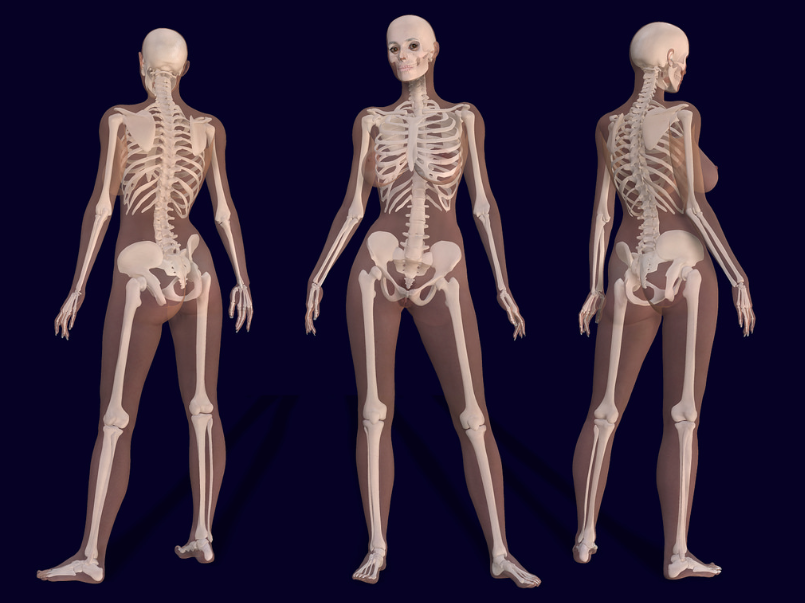 The skeletal system is the system that provides a rigid framework to the body and thereby supports the soft tissues of the body. At birth there are about 270 bones in our body, but as growth and development completes many bones get fused together. Thus the total number of bones in the adult skeletal system is 206. The skeletal and muscular systems are intricately related to each other and together they are commonly called as the musculo-skeletal system. Bones with the help of joints and muscles bring about movements of the body.

Based on their shape, there are four types of bone – long, short, flat, and irregular. Most of the bones of the upper and lower limbs are long bones. They are named so because they are longer than their width. Examples of short bones are the wrist and ankle bones. There are some bones that are flattened in shape like the skull bones, ribs, scapulae or shoulder blades, and the sternum. Irregular bones comprise the facial bones and vertebrae, which have unique shapes.

The skull is made up of 22 bones. It is composed of the cranial and facial bones. Cranium or the cranial bones are the bones that encase the brain by providing a rigid shielding outer layer. This outer layer is made up of 8 bones. There are 14 facial bones which shield the brain from the front side and form the facial structure. All the facial bones are firmly connected to form the basic constitution of the face except the mandible, which is not completely attached to the skull but is a freely movable joint.

Each middle ear has 3 small bones also called as the ear ossicles, incus, malleus and stapes.

Limb bones and girdles together form the appendicular skeleton. Each limb consists of 30 bones. Humerus, radius and ulna are the long bones of upper limbs. There are 8 wrist bones or carpals, 5 palm bones or metacarpals and 14 digits or phalanges. In the lower limbs, femur, tibia and fibula are the long bones of which femur or thigh bone is the longest. The ankle is made up of 7 bones, known as tarsals. Further there are 5 metatarsals and 14 digits or phalanges. There is a peculiar cup shaped bone covering the knee in the front known as the patella. The upper and the lower limbs articulate freely because of the fixed pectoral and pelvic girdles to which they are attached respectively.

Two symmetrical halves make up each girdle. Pectoral girdle (to which the upper limbs are attached) consists of a clavicle and a scapula. Scapula is a large triangular flat bone located at the back bilaterally and a part of the scapula articulates with the head of the humerus to form the shoulder joint. Clavicle is a long slender bone known as the collar bone and forms the front part of the pectoral girdle. Pelvic girdle supports the lower limbs and is made up of two coxal bones. Ilium, ischium and pubis are the three bones that form the pelvic girdle and also provide articulation for the thigh bone or femur. The two halves of the pelvic girdle join in the front as the pubic symphysis which is made up of fibrous cartilage.

Bone Repair occurs naturally and essentially whenever a bone is broken. When a bone is injured blood vessels in the bone are also damaged leading to bleeding and clot formation in the damaged area. Two to three days later a fibrous network of connective tissue is prepared between the broken bones by the blood vessels and cells from surrounding tissues that begin to invade the clot.

This newly formed connective tissue holds the bone fragments together thus filling the gap between bones. Islets of cartilage are also produced by some cells in the fibrous network. This is known as callus. Further the bone forming cells or osteoblasts, enter the callus and gradually replace it with bone, which completes within 4–6 weeks after injury.

Immobilization of the bone is of utmost importance at this time because the new matrix formed is very fragile and is likely to re-fracture. Subsequently, there is remodelling of the spongy bone to form the compact. This completes the repair. Immobilization is critical but should not be extended for a very long span as it could lead to muscle wasting and reduced muscle strength. Thus modern treatment aims to balance immobilization with adequate amount of exercise. This prevents muscle wasting and at the same time the size and strength of bones is maintained. This is accomplished by use of “walking casts and restricting the amount of time a cast is left on the patient. This allows some stress on the bone and some movement thus helping in maintaining the joint mobility. Complete healing of fractured bone may require many months.

Muscle is a specialized tissue that contributes to nearly 40-50 per cent of the body weight in a human adult. Muscles are primarily classified as skeletal visceral and cardiac. Skeletal muscles are those associated with the bones of the body. They are called as the voluntary muscles because their activities can be voluntarily controlled. They are mainly involved in body posture changes and locomotory movements.

Joint or articulation, is where two bones come together. Joints are necessary for movements involving the skeletal parts of the body. This mainly involves the locomotory actions. Joints help in forming an attachment between two bones, or between bones and cartilages. This attachment is such that is allows a specific range of movement. Muscles help in bringing about the movement through joints, where the joint acts as a fulcrum.

Three types of joints are formed between bones or between bone and cartilage – fibrous, cartilaginous and synovial.

Fibrous joints allow very limited movement. This type of joint is shown by the flat skull bones which fuse end-to-end with the help of dense fibrous connective tissues in the form of sutures, to form the cranium.

Joints are capable of different movements and these movements are related to its structure. Thus some joints can perform movements in different directions while some are permitted only limited movement. The different types of movements are flexion, extension, abduction, adduction, pronation, supination, elevation, depression, circumduction, rotation.

Some other movements like eversion, inversion, protraction and retraction are also used. Of these flexion and extension are most commonly performed movements. Flexion literally means to bend and extension means to straighten. Abduction is an action of taking away from the midline of body while adduction is movement towards the body midline. For example, movement of legs away from body midline as done while performing ‘jumping jacks’ is abduction, and adduction is when the legs are brought back together.

Pronation is when on rotation of forearm the palm faces downwards and supination is rotation of forearm so that the palm faces upwards. Eversion is when the bottom of the foot faces outwards and inversion when foot faces inwards. When a structure turns around its long axis such as when shaking the head to say ‘no’ it is rotation. Circumduction is the free movement such as the shoulder joint. Usually locomotion is brought about by a combination of movements.

Functions of the Skeletal System

Disorders of muscular and skeletal system

Like all human structures, bones and joints can also be affected by disease/s.