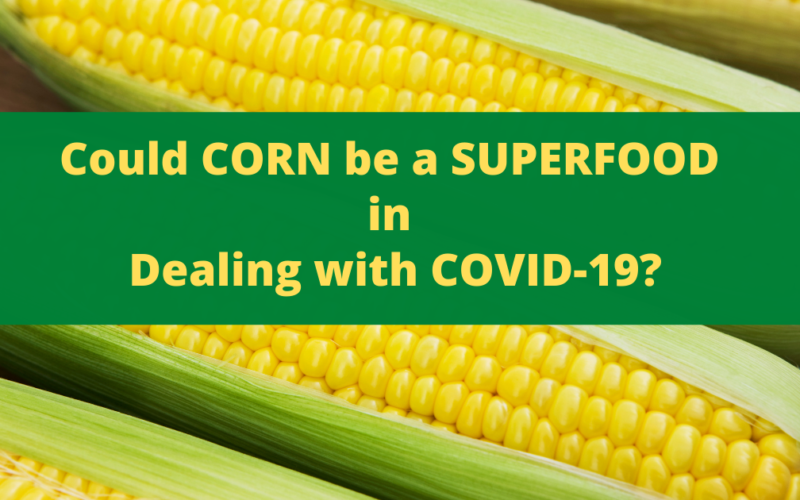 In Part 1 of this article I made the case that the severity of a SARS-CoV-2 infection could be due to high iron stores, and that the gut microbiome plays a key role in this. ( R, R )

I talked about how bad bacteria and viruses flourish in a high iron environment, as they need iron in order to replicate. The body does what it can to keep iron away from these invaders by pulling iron out of the bloodstream, and placing iron in various storage sites around the body.

I also discussed how iron-fortified foods and cooking on cast iron significantly increases these stores, especially in those who are genetically predisposed to absorbing more iron. We also looked at death rates around the world, and the various risk factors in those populations regarding iron-loading.

Excess iron has no pathway out of the body, and I believe this is the cause of most chronic diseases we see today.

In this article, I’m going to make the case that corn (unfortified) that is not cooked on cast iron, could be a superfood in reducing the severity of COVID-19.

But first … my disclaimer: I am not a doctor. I’m not diagnosing or treating any diseases or condition. I’m a nutritionist. I’m simply sharing what I have learned, and this is my take on the situation.

Now back to corn. Corn (also called Maize), has been a staple food source in the Americas for thousands of years. It was first introduced to Europe by Christopher Columbus. It later made its way through Africa and India. Maize is a major food crop in Africa.

Lower COVID-19 death rates are mostly seen in countries whose citizens eat a lot of corn. ( R, R )  (Mexico and Egypt are outliers to this theory, but they have additional risk factors due to fortification, cooking methods and genetics related to iron, which I discussed previously.)

Many people might think that corn is just a filler food, but it is actually quite nutritious. It’s a decent source of protein, vitamins, minerals, as well as other plant chemicals that have medicinal value.

Corn has several compounds in it that in my opinion are of particular importance when dealing with COVID-19.( R )

Let’s start with phytic acid. Phytic acid can bind to iron in our body and actually reduce our iron stores. It has been shown to be therapeutic in cases of iron overload. ( R )  It is typically found in nuts, seeds and legumes. Phytic acid happens to be very abundant in corn. In fact, corn flour has 50-60% more phytic acid than wheat or rice. ( R )

Phytic acid not only helps reduce iron stores, but it keeps iron away from bad bacteria and viruses, making it difficult for them to replicate.(R)

National Public Radio (NPR) did a segment on “What if Americans Ate Like South Africans and Vice Versa?”

In this study, researchers tracked stool and colon samples over the course of a 2-week period during the diet swap. What they found was that there was a significant shift in the microbiome for both parties. The American diet (high in fat and animal protein) caused more colon inflammation, while the African diet (high in corn fiber) improved colon health. ( R )

Research shows that corn fiber is able to dramatically change the makeup of our gut microbiome to one that it healthier, with more beneficial microbes. We already know that these beneficial microbes reduce our risk for obesity, colon cancer, type 2 diabetes and other chronic diseases. ( R )

Butyrate is a substance produced by good bacteria. Not only is it the ideal food source for the cells of our intestines, but butyrate can actually get rid of bad bacteria, and it can improve our resistance to viral respiratory infections. ( R, R )

It makes sense that researchers are now looking at targeting the gut-lung microbiota axis by means of a high fiber diet as a potential therapy for COVID-19 ( R ) and why butyrate enemas may become a supportive treatment for COVID-19. ( R )

Butyrate also happens to be a histone deacetylase inhibitor. I won’t go into details on what that is all about, but basically this is something that can stop the replication of many viruses. ( R, R, R, R )

Corn is also a good source of bioavailable copper. I’ve written before how copper can help fight infections and how it can help to normalize iron levels. You can read more about my research on copper here, along with several case studies.

Additionally, corn is a good source of carotenoids, which are also involved in iron regulation, and has a protective role in the immune response. Beta carotene, a precursor to vitamin A, is involved in the acute phase response we discussed in Part 1of this article. It also helps to promote a more healthy gut microbiome. ( R )  (Note: I don’t recommend beta carotene supplement use. I believe beta carotene intake should be through natural foods such as corn.) ( R )

Many people in the hereditary hemochromatosis world will tell you not to eat foods high in beta-carotene, because they say it increases iron absorption. However, the only study I could find was from 1998 among iron deficient people. I think it’s possible that iron from stores were being released into the bloodstream again because of an improved immune response, and not necessarily due to increased absorption. Beta carotene in that study, normalized low iron levels, which is a good thing. ( R, R )

There have also been some interesting findings regarding cholesterol. Researchers have found that the SARS-CoV-2 virus uses cholesterol as an entry point into the human cell. Unfortunately, cholesterol may increase virus binding opportunities to ACE2 receptors. ( R )

People with high cholesterol may be more at risk. In fact, HDL and LDL levels may be severity markers for COVID-19. Interestingly, as the disease progresses, total cholesterol and LDL levels significantly go down in COVID-19 patients. ( R )

They’ve found that people who use statins (a cholesterol-lowering medication) had a reduced chance of getting severe COVID-19 by 50%, and that they recovered faster than those not taking statins. ( R )

There are natural ways to lower cholesterol, and one of the most powerful natural cholesterol reducers are sterols made by plants, called phytosterols. ( R )

Corn is rich in phytosterols. Phytosterols have been shown to interact and destabilize the membrane of viruses, which in effect, would significantly reduce the ability of a virus to replicate. ( R, R )

As you can see, there are many reasons why corn can be a superfood when it comes to COVID-19. So, add some corn to a favorite dish, eat some grits, spice up some popcorn, or enjoy some cornbread baked in glassware. When buying cornmeal or corn flour, buy organic if possible. In the USA, organic products typically do not have added iron and are not genetically modified. If there is no way to avoid iron-fortified foods, drink some tea with your meal, as tea is known to reduce iron absorption.