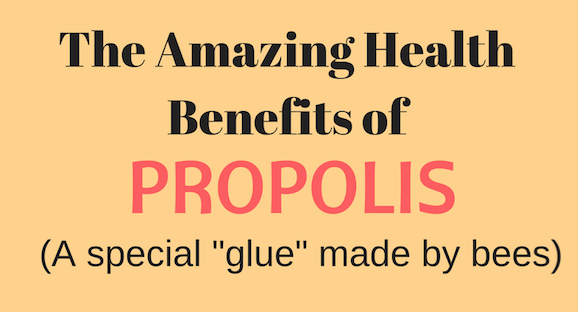 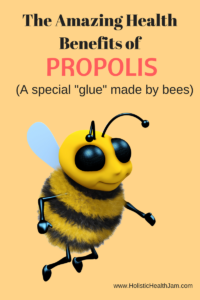 Propolis is bee glue made by bees.  It’s a mixture of saliva, beeswax and a substance bees collect from pine cones, tree bark and leaf buds.  Propolis is used to build and seal sections of the hive.   It’s used to help block viruses, bacteria and parasites from entering the hive.

Propolis has been used as a medicinal agent for centuries.  Ancient Egyptions believed propolis was a source of eternal health and life.   Hippocrates used propolis to heal wounds and ulcers.

Over 300 different compounds have been found in propolis.   It contains vitamins B1, B2, B6, A, C, E as well as various flavonoids, phenylpropanoids, terpenenes, stilbenes, lignans and coumarins.  (1)  It also includes many trace minerals, such as calcium, potassium, magnesium, sodium, aluminum, boron, barium, chromium, iron, manganese, nickel, strontium and zinc.   The chemical composition of propolis is highly variable though.  This is due to the different types of plants and trees that grow in various geographical regions.

Propolis is antibacterial, antiseptic, anti-inflammatory, antifungal, anesthetic and is an exporant.  (That’s a mouthful isn’t it?)

It is often used a key ingredient in topical antiseptic formulas.

Propolis and the Common Cold

Propoplis is often used to protect and shorten the duration of the common cold. In one small, double-blind trial of propolis for the common cold, the group taking propolis extract (amount unstated) became free of symptoms more quickly than the placebo group. (R)

Between 1967 and 1973, studies were done in Denmark, and the results were “sensational”.

The effectiveness of propolis in treatment was proved as well as the fact that it produces almost no side effects. Dr Karl Lund Aagaard, a Danish biologist, earned the name “Dr Propolis” for hisexploits of over 20 years of propolis collecting and research. After observing the effects of propolis on more than 50,000 patients in Scandinavia, Dr Aagaard drew the following conclusions: The field of influence of Propolis is extremely broad. It includes cancer, infection of the urinary tract, swelling of the throat, gout, open wounds, sinus congestion, colds, influenza, bronchitis, gastritis, diseases of the ears, periodontal disease, intestinal infections, ulcers, eczema eruptions, pneumonia, arthritis, lung disease, stomach virus, headaches, Parkinson’s disease, bile infections, sclerosis, circulation deficiencies, warts, conjunctivitis and hoarseness.

Scientists have found several powerful components in propolis that have anti-tumor and anti-cancer effects, and findings show that propolis may be a complimentary medicine in cancer therapy.

The inhibition of matrix metalloproteinases, anti-angiogenesis, prevention of metastasis, cell-cycle arrest, induction of apoptosis and moderation of the chemotherapy-induced deleterious side effects have been deduced as the key mechanisms of cancer manipulation. The components conferring antitumor potentials have been identified as caffeic acid phenethyl ester, chrysin, artepillin C, nemorosone, galangin, cardanol, etc.

These compounds target various genetic and biochemical pathways of cancer progression. Depending on the botanical sources and the geographical origin, biological activities of propolis vary. Despite phenomenal development in cancer research, conventional therapy falls short in complete malignancy management. The findings obtained so far build hope that propolis as a complementary medicine may address the lacunae.

Propolis has anti fungal properties and can help reduce symptoms of yeast infections.  Propolis may be an option for people who cannot take antibiotics.

Widespread causes of indicative vaginitis are bacterial vaginosis (BV) and vulvovaginal candidiasis (VVC). The depletion of Lactobacillus spp. in the vagina is a distinguished feature of vaginal infections. The infection is accompanied by an overgrowth of vaginal pathogens such as yeast-like fungi and an elevated vaginal pH.

Diabetes patients are more prone to having vaginal infections caused by Candida albicans. A study conducted on the application of 5% aqueous propolis solution resulted in an improvement in vaginal well-being. In addition to providing antibiotic and antimycotic actions, propolis provides early symptomatic relief due to its anesthetic properties.

Thus, propolis may be used for Recurrent Vulvovaginal Candidiasis (RVVC) and can be an alternative option for patients who are unable to take antibiotics due to a concurrent pharmacological treatment.

The effectiveness of propolis against conventional antifungal nystatin has shown satisfactory results. Propolis extract solution (PES) also show low toxicity in human cells and can be an alternative treatment for chronic vaginitis. In addition, PES has antifungal properties and it can be used as antibiofilm material for RVVC to counteract biofilm growth of C. albicans and resistance in antifungal drug.

Propolis and Parasitic or Bacterial Infections

Propolis is anti-bacterial and anti-parasitic. It makes it difficult for parasites to attach themselves to our tissues.

Studies show that it can be helpful when dealing with Giardia and Helicobacter Pylori infections.

Infection with parasites usually occurs upon contact with an infected surface. The symptoms of parasitic infection of the GI tract include abdominal pain, diarrhea, bloating, and nausea. Propolis has been reported to have several biological efficacies including anticancer, antioxidant, and anti-inflammatory activities.

There are a few studies that reported the clinical use of propolis in the treatment of viral infections. In one study, the in vitro effect of propolis ethanolic extract on the growth and adherence of Giardia duodenalis trophozoites was evaluated. Propolis was shown to inhibit growth and adherence of the trophozoites. It also promoted the detachment of these parasitic organisms.

Its efficacy against giardiasis has also been reported in a clinical study whereby children and adults with giardiasis-given propolis showed a cure rate between 52% and 60%, whereas those given the conventional drug showed a 40% cure rate.

Another experimental study showed that propolis has antihistaminergic, anti-inflammatory, antiacid, and anti-H. pylori activities that can be used to treat gastric ulceration. (R)

Propolis with its anti-bacterial and anti-fungal nature, has been shown to be beneficial when it comes to oral health.  It helps to prevent plaque build-up, cavities, gingivitis and periodontal disease.

Dental use of propolis has been emphasized by several studies; in addition to decrease dentinal hypersensitivity and permeability of dentin and occlude dentinal tubules, it has been found to be beneficial in many aspects, including prevention of dental caries; reduction of oral mucositis resulted from chemotherapy; oral cancer; gingival and periodontal diseases; plaque inhibition and anti-inflammatory; as a constituent of dentrifice to control oral microbiota; as an effective transport medium for increasing periodontal ligament cell viability of avulsed teeth; direct pulp capping; and as an analgesic.

In a mouse study, propolis was able to decrease blood levels and increase insulin levels.

Our study showed that oral supplementation of diabetic mice with propolis modulated glycemia by decreasing the blood glucose levels and increasing the insulin level to values similar to those observed in non-diabetic control mice.

The purpose of this trial was to determine the effect of bee propolis on glycemic control, serum lipid profile and insulin resistance indices in patients with type 2 diabetes  Based on this study, the daily intake of 900 mg of bee propolis supplement for 12 weeks results in improvement of glycemic and some serum lipid levels in patients with type 2 diabetes.

In a rat study of 200 rats with fatty liver disease, scientists found that rats treated with propolis had a “statistically significant” improvement on the biochemical markers of NAFLD. (R)

In a mouse study, it was found that propolis promoted “significant improvements” on lung repair in the recovery of alveolar spaces.   It was also able to recover alveolar septa and elastic fibers.

Propolis promoted lung repair in a mouse emphysema model via macrophage polarization from M1 to M2 in parallel to the downregulation of IGF1 expression in a Nrf2-independent manner.

The below study found that propolis was more effective in treating genital herpes than a commonly used drug.

For 10 days, 90 men and women with genital herpes applied either an ointment containing propolis flavonoids, or acyclovir (a drug used to treat herpes sores), or a placebo ointment.  The patients applied the ointment four times a day.

Propolis may be an effective alternative option to treat acne due to its anti-bacterial and anti-inflammatory properties.

Topical propolis is a promising, effective, well-tolerated, safe, and alternative medication for acne vulgaris. It has anti-inflammatory and antibacterial properties. Further studies are needed for its application in different skin diseases.

How to Use Propolis

Propolis is available in capsules, tablets, topical creams, sprays and as a liquid extract.   If taken orally. most manufactures recommend 500 mg/day.

Where to Buy Propolis

Propolis can be purchased at most health food stores. You can also purchase propolis products on Amazon.

Propolis is generally nontoxic, though allergic reactions have been reported.  These reactions are typically limited to skin rashes; however, as with other bee products (e.g., pollen and royal jelly), more severe allergic reactions are possible. People who are allergic to bee pollen, honey, or conifer and poplar trees should not use propolis unless tested first by an allergy specialist. As the effects of propolis during pregnancy and breast-feeding have not been sufficiently evaluated, women should not use it during these times unless directed to do so by a physician.  (R)

Honey bees provide us with honey, propolis, wax and royal jelly.   They are also important pollinators that make it possible for us to buy foods like almonds, apples, oranges, blueberries, cherries and avocados.  Without bees, these crops would disappear.  Unfortunately, the honey bee population has been in decline.  American beekeepers lost 33 percent of bees in 2016-17.

We need to look out for our bees.   What can you do to help? 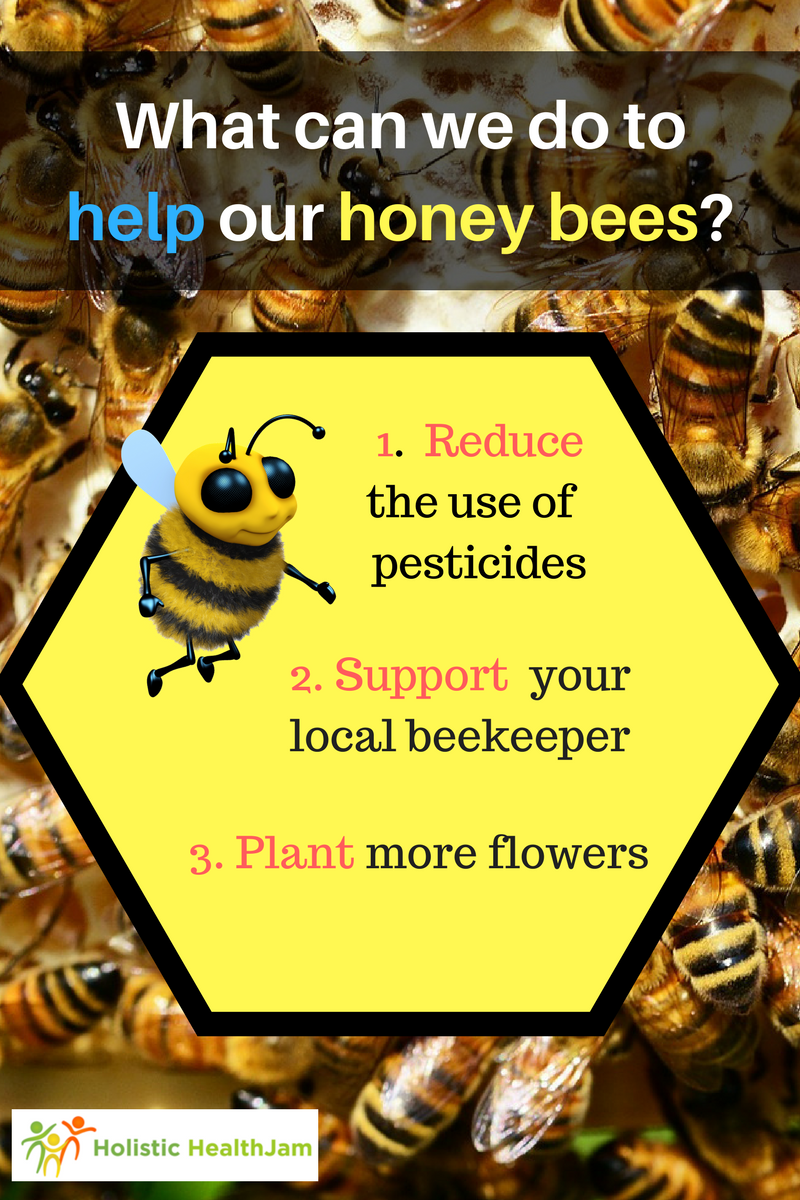