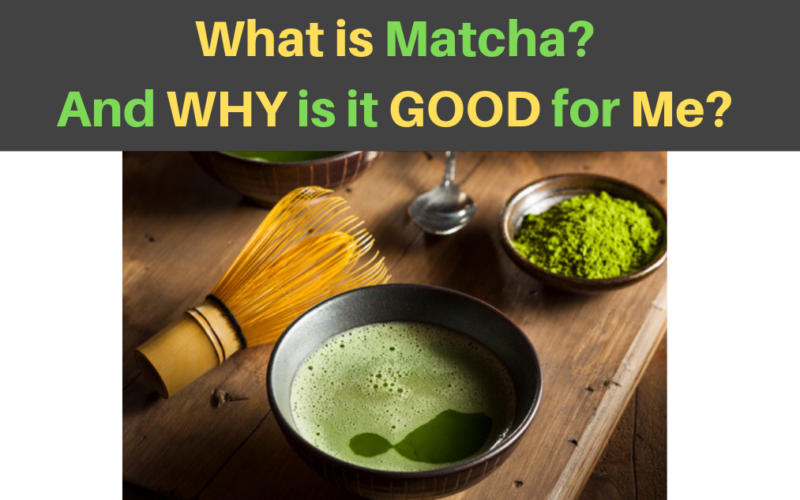 What is matcha? And what are the health benefits?

Everyone is talking about matcha. There has been a huge increase in its popularity.  But what in the world is matcha?

Matcha originated in China around the 10th century and was adopted by the Japanese around the 12th century. The best matcha comes from Japan and the most popular growing regions are in the southern half of the country. The popularity of matcha is due to its purported health benefits and its nice distinct flavor.

Matcha is made from green tea leaves that have been stone ground into a powder and sifted to remove any splinters. Not just any green leaves, though. To make matcha, the tea bushes are covered from the sun for 20 days before harvest. This increases the amount of chlorophyll in the leaves, and it increases the amount of L-Theanine, an amino acid that occurs naturally in the tea plant. If you have noticed how tea tends to both calm and stimulate you at the same time, it’s because of the L-Theanine. Matcha has a higher dosage of it than other teas.

Matcha is usually made in two forms. There is thin tea called usucha which is generally served in cafes and restaurants. It is made by whisking the cheaper matcha powder into hot water.

Then there is thick tea known as koicha. It is made with twice the amount of matcha kneaded into half the amount of water as usucha, resulting in a tea as thick as paint. Koicha is usually prepared during traditional tea ceremonies and is made from the highest quality of matcha powder.

Because of the labor involved, matcha is more expensive than other teas. 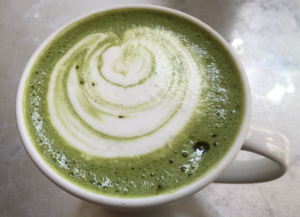 Green tea is an excellent source of a type of a flavonoid, a catechin, called epigallocatechin gallate (EGCG).   One study found that matcha contained 3 x more EGCG than regular green tea.  EGCG is being extensively studied for its therapeutic properties.

From the University of Maryland Medical Center:

Green tea has been used traditionally to control blood sugar levels. Animal studies suggest that green tea may help prevent the development of type 1 diabetes and slow the progression once it has developed. In people with type 1 diabetes, their bodies make little or no insulin, which helps convert glucose or sugar into energy. Green tea may help regulate glucose in the body.

Prevention and Treatment of Type 2 Diabetes

EGCG beneficially modifies glucose and lipid metabolism in H4IIE cells and markedly enhances glucose tolerance in diabetic rodents. They even go on to suggest that “Dietary supplementation with EGCG could potentially contribute to nutritional strategies for the prevention and treatment of type 2 diabetes mellitus.

Researchers have found that EGCGs kill cancerous cells and stop them from growing.
The University of Maryland writes:

In one study of 472 women with various stages of breast cancer, researchers found that women who drank the most green tea had the least spread of cancer. It was especially true in premenopausal women in the early stages of breast cancer. They also found that women with early stages of the disease who drank at least 5 cups of tea daily before being diagnosed with cancer were less likely to experience a recurrence after they finished treatment.

In another paper, EGCG has proven to inhibit tumor growth in a variety of test-tube studies involving cancer of the stomach, lungs, liver, breast and colon. In addition, it promotes the death of cancer cells. The authors concluded that EGCG presents a promising cancer treatment, either alone or with other therapies.

Studies are finding that there are higher levels of copper, iron, zinc and aluminum in the brain of Alzheimer’s patients. It’s been found that EGCG can help with a metal detox, as it not only chelates copper, iron, and zinc but can pass through the blood/brain barrier.

[T]he gut contains over 100 trillion bacteria (that’s ten times the amount of bacteria than we have human cells!) that play a vital role in our overall health. These bacteria are negatively altered by antibiotics, stress, the food we eat, and more, eventually leading to a problem called dysbiosis. Dysbiosis is an imbalance of bacteria that can occur in any of our mucus membranes, such as in the lungs, mouth, nose, and of course, the gut. . . . Dysbiosis is probably much more common than you’d think: it’s often seen in those with inflammatory bowel disease, fatty liver, obesity, colon cancer, IBS, and more. One of the best things we can do for our digestive (and overall) health is balance our gut bacteria. Luckily, there are plenty of ways for us to do that and consuming polyphenols is one of them!

L-Theanine is an amino acid found in matcha that promotes a state of relaxation and well-being. Stress can induce beta waves in the brain.

L-Theanine is common in all tea, but matcha contains five times the amount of L-Theanine that is found in black and green teas. L-Theanine may help memory and learning ability, due to its ability to reduce distracting information, improving performance on cognitive tasks.

How is Matcha Traditionally Prepared?

You can see a demonstration in the video below. Taking the time to be mindful and to enjoy the process of preparation, is a wonderful mechanism to lower stress. That’s not always possible, since it does take a while to froth.   Because of that, many people use a handheld electric milk frother

instead.  (FYI- a matcha latte with a milk of your choice is very tasty.) Get this Iced Coconut Matcha recipe at Sprinkle of Green

Phytochemicals are real chemicals which affect the body. If you are taking medicine, you should not drink green tea without discussing the effects with your doctor.

This is even more important when you want to take matcha, which has a higher concentration of L-Theanine. Below are a few examples.

Adenosine – Green tea may inhibit the actions of adenosine, a drug given to patients with irregular and possibly unstable heart rhythm.
Beta-lactam antibiotics – Green tea may increase the effectiveness of beta-lactam antibiotics. It tends to reduce the resistance of the bacteria to treatment.
Benzodiazepines – Caffeine, which is found in green tea, has been found to reduce the sedative effects of benzodiazepines, a drug used to treat anxiety.
Propranolol and Metoprolol – Caffeine may also increase blood pressure in people taking these drugs used to treat high blood pressure and heart disease.
Blood-thinning drugs – Green tea contains vitamin K which can make Warfarin ineffective. If you are taking aspirin for blood thinning, do not take green tea because both prevent platelets from clotting. A combination of the two may increase your risk of bleeding.

There are many other known interactions of green tea with drugs. You may want to avoid green tea, especially matcha, while undergoing treatment of any kind.