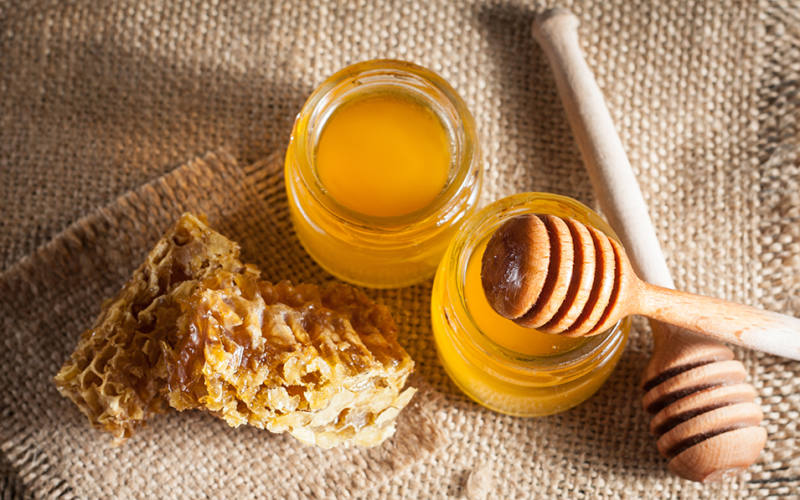 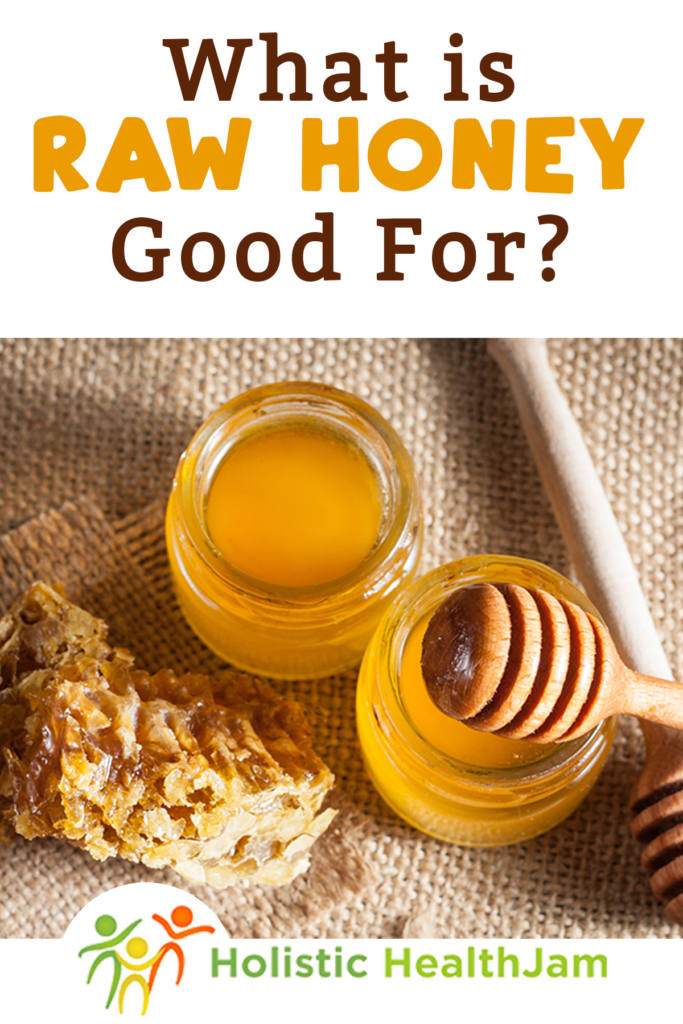 Natural raw honey is produced by bees from the nectar of plants. Honey is a complete food containing a wide variety of minerals such as calcium, copper, iron, magnesium, manganese, phosphorus, potassium and zinc. Honey is a source of B vitamins (B1, B2, B3, B5, B6, B9), vitamin C, and vitamin K. Additionally, honey contains many enzymes, antioxidants and phytochemicals, which are currently being studied for their medicinal value.

One of the main reasons for honey’s health benefits is due to its antimicrobial and antifungal nature. Honey can actually suck the juices right out of any bacteria, mold or fungus that tries to set up shop.

Humans have used honey medicinally for thousands of years.  The ancient Egyptians, Assyrians, Chinese, Greeks and Romans used honey for digestive issues and to heal wounds.

But what does modern science say? Let’s delve into the research to learn more about what raw honey is good for and answer some commonly asked questions.

Is Raw Honey an antibiotic?

Raw honey is both antibacterial and antifungal. Honey kills gram-negative and gram-positive bacteria, including Salmonella, E. coli, and Staphylococcus aureus.  It is also inhibits the growth of Candida albicans.  Best of all, honey is effective against antibiotic resistant bacteria.

Raw honey can help with urinary tract infections. In fact, it is more powerful than many commonly used antibiotics.

Is Raw Honey a Probiotic?

Because honey is antimicrobial, it is not considered to be a probiotic.  It does however, contain prebiotic substances such as fructo-oligosaccharides (FOS).  A prebiotic is a food ingredient that helps promote the growth of beneficial bacteria.

But this begs the question, can honey be both a prebiotic and be antibacterial at the same time? Research is still being done to answer this question.

In mouse studies, it has been shown that there is an increase in beneficial bacterial growth. Perhaps that has less to do with the prebiotic substances in honey, and more to do with honey’s impact on neutralizing bad bacteria, thus creating an opportunity for beneficial bacteria that live further down the digestive tract.

Our digestive tract is full of microorganisms.  Some are good, and some are bad. Most gut issues are due to an over population of bad bacteria.  Research is becoming very clear that our gut bacteria control many aspects of our health.  This is where many of honey’s health benefits come in to play.

For instance, the pathogenic (bad) bacteria Helicobacter pylori has been shown to cause acid reflux, peptic ulcers, small intestinal bacteria overgrowth, gallstones, and more. Honey intake at least once a week was associated with a significantly lower prevalence of an H. pylori infection.

In a study involving 169 children with the stomach flu, it was demonstrated that honey with electrolytes shortens the duration of bacterial diarrhea.

Honey was also reported to enhance the growth of good bacteria, such as Lactobacillus acidophilus and Bifidobacterium bifidum.

Is Raw Honey Good For Diabetics?

And you’ll be happy to know that honey does not increase body weight in overweight or obese people.

Yes! Simply add a tablespoon of lemon juice and a tablespoon of honey to a cup of hot water.  You can either drink as a warm tea, or wait until it cools to room temperature and use it as a gargle.

Honey has also been show to help with pain control after a tonsillectomy.

Is Raw Honey Good For Allergies?

Yes! In a randomized placebo-controlled trial, it was found that patients who ingested honey at high doses (1 gram / kg of body weight) for 4 weeks, experienced significant alleviation of their overall allergy symptoms, with a steady improvement of symptoms throughout the study period, as compared to the placebo group.

A study in breast cancer patients found that honey lessened hot flashes and other symptoms of menopause.

Many hair products now contain honey and other bee products such as propolis. This is because honey stimulates hair growth, strengthens hair follicles, and helps to prevent hair dryness.  You can make your own hair rinse with honey. Simply mix a tablespoon of honey with a cup of warm water, and rinse your hair with it after you shampoo.

Honey applied daily to the eyes improves eyesight. Because of the antimicrobial and anti-inflammatory properties of honey, it is very effective at clearing infections, even when conventional treatments are not.  Honey is also useful in treating dry eyes and helps in the prevention of cataracts.

You can make your own eye drops by adding a little honey to distilled water or to a saline solution.  Alternatively, you can purchase honey eye drops on Amazon.  It may sting for a couple of minutes after application.

Asthma is a chronic inflammatory airway disease. Although honey has anti-inflammatory properties, honey alone has no strong evidence of being effective in controlling asthma. However, when honey is used in combination with other substances such as Nigella sativa or celery seed, there is a significant improvement in patients with asthma.

The World Health Organization considers honey to be a valuable treatment of cough, stating that a hot tea with honey and lemon can be used with young children, but should be avoided in young infants (or infants up to 4-6 months who are exclusively breastfeeding).

In a study of 44 randomized control trials, it was found that honey intake was effective in the prevention and treatment of oral mucositis in cancer patients and coughs associated with upper respirator infections in children.

A 1:1:1 mixture of honey, beeswax and olive oil is useful in the treatment of diaper dermatitis, psoriasis and eczema.

Honey was used on the battlefield over 4,000 years ago to heal wounds.  Surgeons would use a mixture of grease and honey, and apply that to the wound.

Traditional Ayurvedic experts recommend honey for skin disorders such as wounds and burns. Because of the antibiotic nature of honey, a wound is able to stay sterile until it is healed.  Even infected wounds and ulcers become sterile within one week of a honey application.  Honey also promotes new skin growth.

A study from West Africa showed that skin grafting and amputations were avoided when honey was applied, whereas conventional treatments failed.

Manuka honey is currently being used in hospitals around the world and can even be found on Amazon in the form of ointments and bandages.

Honey is a natural laxative.  The laxative effect may be due to unabsorbed fructose.

Raw honey is a functional food with many health benefits.  It however can on occasion contain botulism spores. Because of this, it is best to wait until the child is at least 12 months old before giving them honey, as their immune system is more developed.

Is Raw Honey Safe During Pregnancy?

Yes! Eating honey during pregnancy is safe.  Although rumors of botulism exist, the research journal of the Canadian Family Physician reports that even if a woman was to acquire botulism during pregnancy, there is no increased risk to the fetus.  This is because the toxin is unlikely to cross the placenta.

Is Raw Honey Safe for Infants?

Raw honey is not recommended for infants because unprocessed honey may on occasion have spores of clostridium botulinum in it, which can result in botulism.  Children under 1 years of age are still developing their immune system and may not be able to fend off these spores.

Is Raw Honey Safe for Toddlers

It’s best to wait until a child is over 12 months old before giving them raw honey, as their immune system is more developed. It is also now an established fact that feeding honey to children will improve memory and growth, reduce anxiety, and enhance a child’s performance later in life.

Is Raw Honey Safe for the Elderly?

Yes!  Honey can help with many ailments that the elderly are faced with, such as cataracts, diabetes, cardiovascular heart disease and infections.

Is Raw Honey Safe for Diabetics

Yes!  Honey is anti-diabetic, and helps with blood sugar control.

Research shows that honey and cancer have a sustainable inverse relationship, which means that an increase in honey reduces cancer.

Honey is highly cytotoxic against tumor or cancer cells while it is non-cytotoxic to normal cells. “The data indicate that honey can inhibit carcinogenesis by modulating the molecular processes of initiation, promotion, and progression stages. Thus, it may serve as a potential and promising anticancer agent which warrants further experimental and clinical studies.”

How Much Raw Honey Should I Eat Daily

Enjoying a teaspoon or two of raw honey each day in a cup of tea, on a biscuit, or from a spoon is just fine. Increased consumption may have too much of a laxative effect.

How to Store Raw Honey After Opening

Honey never spoils because of its acidity and low moisture content.  Microbes cannot live in that environment, and thus are unable to cause honey to go bad.

No.  Raw honey has an indefinite shelf life, as microbes cannot grow in it and break it down. Ancient honey has been found on many occasions, and it is still consumable.

Summary: What Is Raw Honey Good For?

The use of raw honey for medicinal purposes dates back to over 8,000 years ago.  Honey was so treasured during the Roman period, that it was used instead of gold to pay taxes. Historically, honey has been used to heal wounds and infections, relieve constipation, fatigue, worm infestations and more.  Modern science is now beginning to learn more about the amazing healing properties of honey, and pharmaceutical companies are incorporating honey into many of their treatments.